In my first year microeconomics module I have been talking about monopoly and oligopoly markets for the last few weeks. Over the years I have found that one thing my students struggle a bit with in the latter situation is the tension between the cooperative outcome and the competitive (Nash) equilibrium. If I present the situation in a simple pay-off matrix they seem intuitively drawn to the cooperative outcome where the profits are clearly higher than those in the competitive equilibrium. Why would you compete if that is clearly worse for everyone?

To me, this seems like a perfect example of a situation where experiencing the different incentives yourself, instead of observing and thinking about it from the sideline, can help a lot in understanding. Which means that it is a perfect opportunity to do a classroom experiment with the students in the role of a profit maximizing firm.

The set up is quite simple. I divide the class into small groups who all play the role of one firm. They are told they operate in a market where the (inverse) demand for the things they produce can be expressed by the function: Price = 250 - Quantity Supplied. This should be familiar because this is how for the past weeks I have been talking about monopolies and oligopolies: if you want to sell more you have to decrease the price (I only cover the Cournot oligopoly).

The cost side of the story is kept simple: Marginal Cost is constant at 10. There are no Fixed Costs. Each group has a form where they can register their supply decision and keep track of their earnings.

In the first few rounds the firms are the only firm in their market. Everybody is a monopolist. So the firm's profit maximizing supply decision should be quite easy to figure out. Although, to be honest, calculating this using derivatives etcetera isn't part of the learning outcomes of this module; we keep that for the second year. But students should be familiar with MR = MC. A couple of groups do use this method. (The correct answer is a quantity of 120). The rest of the groups take a much easier strategy: try a safe looking number in the first round, observe the profits other groups maker and mimic the highest grossing ones for the next round.

(All decisions and outcomes are public. I use a specially formatted excel-doc to help me calculate the profits and that's projected on the screen in front of the class). 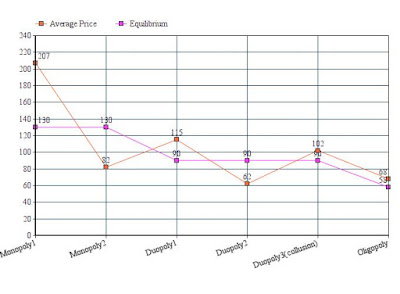 This doesn't go completely right. See above. Supply decisions in the first round are far too cautious (resulting in a high average price but profits below the maximum). But there is considerable overshooting in the other direction in the second round (with some groups proposing a supply of 249). Maybe next year I should do at least one more monopoly round. On paper this version shouldn't be particular interesting because of the lack of strategic element.

In the next stage of the exercise, firms are part of a duopoly market. Every firm has a letter-number code (A1, A2, B1, B2 etc.) and I explain that the two A's interact with each other in market A, the two B's in market B and so forth. The costs and the way the price is determined is the same as before but now the Quantity Supplied in Price = 250 - Quantity Supplied is equal to the total supply by the two firms.

The Nash equilibrium in this duopoly market is where both firms supply 80 units resulting in price of €90. The first thing a lot of groups do, after the rules of the new version are explained, is to look for the group that makes up the other firm in their market to see if there is some deal to be made. In my role as market authority I obviously forbid this kind of attempts at collusive behaviour (but am secretly happy that they know that talking to their competitors might be good for business).

Even without communication the level of competition is not particularly high at first. The average price in the first duopoly period is actually much closer to the cooperative than to the competitive price. (See above. Price in the cooperative situation is obviously the same as in the monopoly situation, €130). Luckily this kind of tacit collusion seems to break down pretty quickly because in the second duopoly period prices are much lower (lower than the competitive equilibrium price even). The third duopoly period I allow for communication between firms within a market. Most firms take advantage of the opportunity. Lots of deals are struck. The majority of which are subsequently broken. But still, the average market price is above the competitive price again.

Whether the students have really understood the point of the exercise - comparing monopoly and duopoly outcome and, especially, why the competitive Nash equilibrium is, well, the equilibrium - we will see in a couple of months in the final test. But their behaviour and decisions and questions made me fairly optimistic.

We did a third version of the game with four firms per market - A1, B1, C1, D1 and A2, B2, C2, D2 - in order to show that more competition leads to even lower prices. And that collusion between 4 firms is more difficult than between two firms. I did find lower average prices in this quatropoly(?) version but not quite as low as the competitive equilibrium predicts. Maybe I should have played this version more than once as well. Prices dropped significantly in the second round of the duopoly too.