I must confess that I am not really covering the whole width of behavioural economics in my three non-Endowment Effect exercises because 2 of them are about Framing but they always work and the students usually seem interested in the results. I mean, for the Endowment Effect exercise it takes some effort to explain why WTA and WTP should be similar but in most framing exercises it is pretty clear that we should see the same answers in both conditions.

First of all I do the classic Asian Disease Problem. Which starts:

Imagine that the U.K. is preparing for the outbreak of an unusual disease, which is expected to kill 600 people. Two alternative programs to combat the disease have been proposed. Assume the exact scientific estimate of the consequences of the programs are as follows. Which program would you prefer?

And then there are two versions of the answers:

Students see randomly one of the two versions (AB or ab). Reading them both it should be clear that option A and a are numerically the same and B and b are too but that they are either phrased in terms of saving or losing lives. So yes, you can have a preference for the risky or the certain outcome but it shouldn't matter how it is presented. But it does. The majority of students choose the certain outcome (A) when the problem is presented as saving lives but when the problem is presented in terms of lives lost the vast majority goes for the risky option (b). 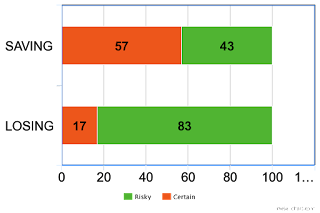 The second example is known in the literature as the p-bet and $-bet problem. Here students are presented with the following scenario:

You are offered a ticket in one of the following lotteries:

And are asked to answer one of two questions (again randomly determined):

Which one would you prefer? Lottery A or Lottery B

How much would you be willing to pay for a ticket in lottery A (In pounds)? And in lottery B?

I don't actually spend a lot of time going over possible reasons for these findings (for the Asian Disease Problem for instance it is related to loss aversion and that we, as humans, are more likely to take risks when something is about losses, or presented as such). I keep that for my third year advanced micro-economics module about behavioural economics but here simply present them as examples of framing: it matters how you present an (economic) question.

The third exercise is supposed to show the Anchoring Effect and is a version of one of Tversky & Kahneman's classic experiments. Each respondent starts with a random number - in my case the last two numbers of their student ID - and they are subsequently asked:

Think of the number above as a percentage. The number of all the countries in Africa that are a member of the United Nations, is that higher or lower than this percentage?

How many of all the countries in Africa - as a percentage - do you think are a member of the United Nations?

The correct answer to the last question is not really relevant (I have run this experiment for years and I have never bothered looking it up). What's important is that probably not many students know it and, obviously, that the random number the students start with should have no influence on their guess. But in Tversky and Kahneman's case (and many other examples) it does. Respondents who start with a higher random number guess, on average, a higher percentage. The idea is that if irrelevant anchors can have an influence in a question like this, they also might have in other, econonomic, situations. For instance with respect to prices for unfamiliar goods.

The trouble is that I so far have never found this effect in my students. I have been trying this exercise for a number of years but I keep finding no relationship between the random number and the percentage they answer. In previous years I often didn't include the higher/lower question so I blamed that but this year I did it exactly as Tversky and Kahneman did it and I do find a positive relationship, see below, but it's nowhere near statistically significant. 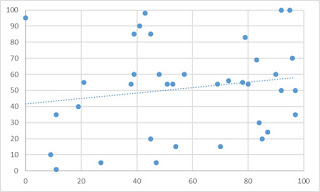