What Do First-Year Economics Students Know About Inequality? (Part II) 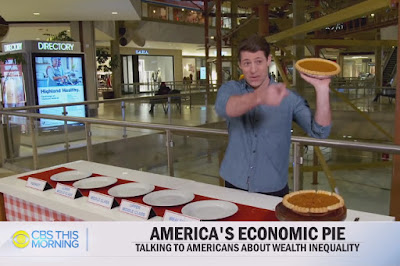 Not all of my interactive classroom exercises are a success.

A little bit of background: for the last few years I have been using various exercises in my first-year Microeconomics teaching to get students to think about income/wealth inequality. I used to do a version of Norton and Ariely (2011) (it's basically the same as this that went a bit viral last month. I didn't use pie though...). In this exercises students consistently underestimate the income inequality (of the UK in our case) which is a great way of making the topic salient and interesting. However, there are some issues with this particular approach and last year I tried something else which worked a bit too well because the students almost exactly correctly guessed the level of income inequality. Which on the one hand is great but on the other makes it less interesting as a jumping off point to talk about inequality. (I wrote a previous blog about this).

This year I tried the approach described by Kiatpongsan and Norton 2014. They ask their participants to guess a specific type of inequality, the so-called CEO-to-(average)-employee pay ratio and, very promising for my goals, find that people 'dramatically underestimate actual pay inequality'. Dramatically! If that won't make the topic salient I don't know what will. So, feeling optimistic, at the start of the lecture I asked my students to say how much they thought an average CEO of a FTSE 100 earned in a year and what the salary of an avarage UK employee was. (I also asked them what they thought a CEO and an average worker should earn to determine their preferred level of inequality).

According to the CIPD, as reported by the BBC, the average FTSE 100 CEO earned about £3.5million in 2018 and the average full-time worker in the UK earned £29,574 making the CEO earn about 117 times the salary of the average worker. My students were pretty good in guessing the average salary. There was quite some variation (from £20,000 to £52,000) but the average of £29,329 was very close. But they were way off in their guesses of the average earnings of the CEO's. Their average guess was a whopping £43.3million resulting in a CEO-to-employer pay ratio of 1475; about 12 times the actual ratio. Some of this difference is caused by one or two extreme outliers (£870million, really? On average?) but even if you remove these the guessed ratio is at least double the actual one. (Strangely, last year, when I used Eriksson and Simpson (2011)'s method of asking them to guess the average wealth for the bottom 20%, next 20%, middle 20%, next 20% and top 20%, there was quite a lot of variation in absolute numbers but the (average) pay ratio was pretty close to the real one).

So yes, as an exercise to show that actual inequality is larger than the students think, this new approach failed spectacularly. Back to the drawing board. I have some ideas (I think I will go back to Eriksson and Simpson but ask about salaries and not about wealth) but will have to wait until next year to be able to try them out.