Market Fairness (according to my students)

In my first-year Principles of Micro-economics class I like to use one of Kahneman, Knetsch, and Thaler (1986)'s classic exercises on fairness in markets. I simply ask my students if this:

A hardware store has been selling snow shovels for €15. The morning after a large snowstorm, the store raises the price to €20.

is fair or unfair. The standard economic argument is that it is fair because the increase in price will make sure that all the snow shovels are allocated efficiently. In the real world regular people don't necessarily see it that way. In Kahneman et al.'s study 82% of the respondents think the price increase is unfair.

In my experience my students think much more like economists. Which is not entirely surprising since they are economics students (albeit at the very start of their education). In previous years I asked the question with a simple show of hands and usually the vast majority thought the change in price was fair. This year I used an online questionnaire tool ánd I asked a little earlier (after they had learned about demand and supply and the market equilibrium but before any explicit coverage of efficiency etcetera) and still 52% of the students thought it the action was unfair. 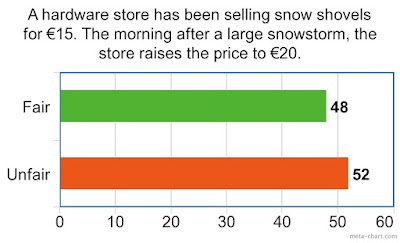 Although I should be content that a considerable number of my students already seem to think like economists in the third week of their degree I do use the results also as an introduction to discuss Richard Thaler's arguments against price gouging.

Using the online questionnaire tool made it easy to ask some other questions on the topic of market outcomes and fairness as well. I framed these two extra questions a bit differently and asked explicitly whether they thought the government should intervene in a particular market. The results suggest that personal experience influences their answers. The majority of the students (who live in London, mostly still with their parents because they can't afford to move out) are in favour of rent control: 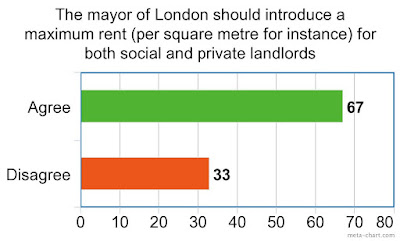 On the other hand an almost similar sized majority was against making ticket touts illegal (maybe I should check to what extent individual respondents gave opposite answers to these two questions): 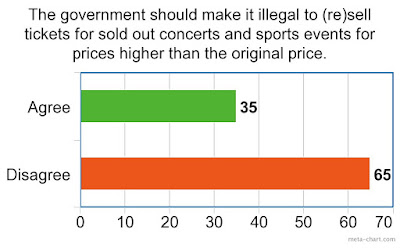