I had this great idea for a study. Then I did a literature search.

One of my favourite papers ever is Fischbacher, Gächter and Fehr's 2001 paper where they investigate conditional cooperation. Using a simple but clever design around the standard public good game they are able to divide their participants into a couple of different types with regard how they react to how much other people in the game cooperate. There is a not insignificant percentage of free-riders - around 30% - but a plurality of their subjects (50%) can be classified as conditional cooperators. They are willing to cooperate as long as the other players in the game also cooperate. There is another 14% of players whose behaviour can be described as 'hump-shaped' (matching cooperative behaviour when others' contributions are low but free-riding more and more as total contributions by others increase) and a small percentage of participants whose behaviour can't be easily be classified ('others').

Lately I have been working on some projects involving public good games and framing. Seeing how presenting the decision to contribute to the public good might influence the contribution rates. One often used example of this kind of framing is the difference between a Give- and a Take-frame. In the former you start with an endowment and your decision is how much of this to put in the public good. In the latter version the money starts out in the public good and your decision is how much to take out. The two situations are mathematically the same and as such shouldn't lead to different behaviours, but often do.

It made me wonder if this Give- and Take-frame difference might have an influence on the conditional cooperation as introduced by Fischbacher, Gächter and Fehr. Especially if it would change the distribution of types. Being told how much other people contributed and then being asked how much to contribute might have a different effect on behaviour than being told how much other people had taken out and then being asked how much you wanted to take out. I hadn't thought about it hard enough to have formulated a particular hypothesis about the direction this effect would work in but I did know I wanted to use the concept of 'conditional non-taking' in the title. But, as you might have guessed from the tweet quoted above, when I started to do some reading on the topic it turned out the idea had already been studied.

The main question Martinsson, Medhin and Persson study in their 2016 paper Framing and Minimum Levels in Public Good Provision is the effect of forced minimum contribution levels in Give- and Take-frames but they do so using the methods of Fischbacher, Gächter and Fehr and in their results section they investigate the conditional cooperative behaviour as well. The graph below (figure 1 from the paper) summarizes the average effect: average contributions are slightly lower for Take-decisions but there is conditional cooperation in both the Give and the Take frame. In both conditions the relationship between how much the other people in the group are contributing and how much the average participant would like to contribute is positive. 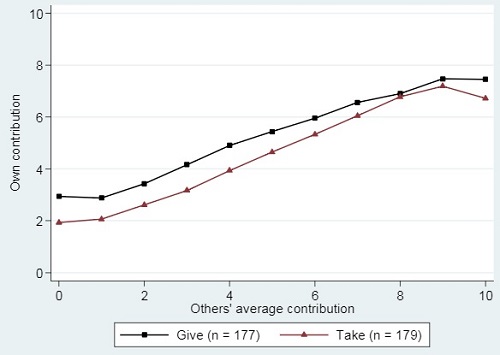 They also divide their participants into the four different behavioural types. (By the way, they run their study as a lab-in-the-field experiment in Ethiopia which makes it extra interesting). The table below is based on their Tables 6 and 7. The numbers look pretty similar for both conditions and are, according to a Chi-Square test, not statistically significantly different.

So, without doing any actual work myself, I still have an answer for the question that I had. Does presenting a public good game in a Give- or Take-frame influence the distribution of conditional cooperative types? No, not really.